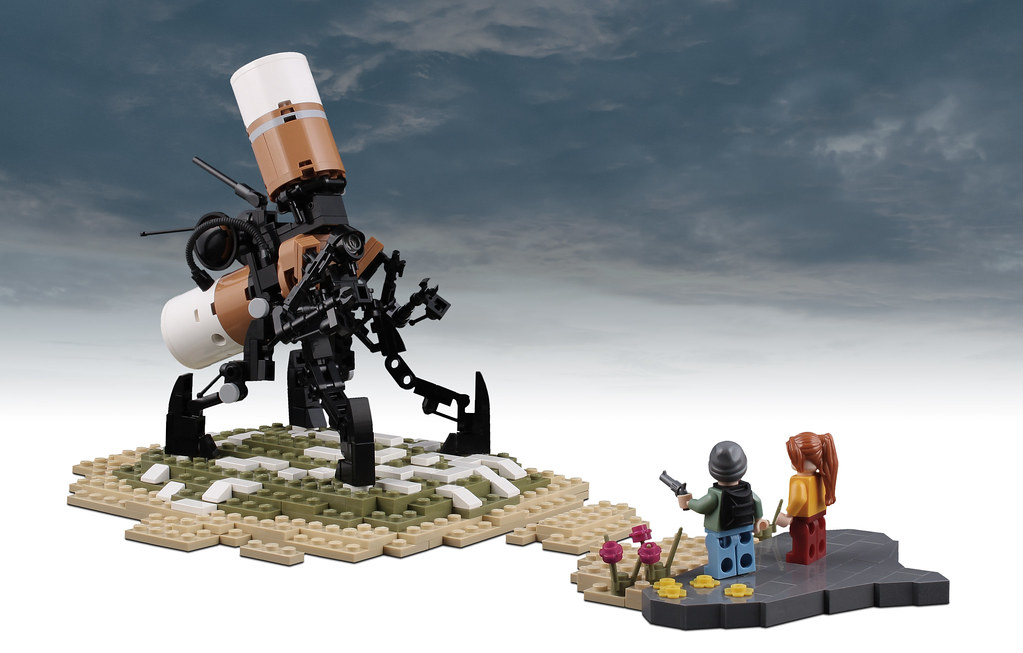 One of the fun things about the MOC community is that you’re sometimes exposed to other non-Lego creative works you hadn’t known about when brick artists use them as inspiration for their MOCs.

That was the case for me with this impressive mech build. I just thought this was a cool Lego mech with a scene that seemed to tell some kind of eerie dystopian story. But builder Thorsten Bonsch (Xenomurphy) is referencing the amazing (and equally eerie and dystopian) work of Simon Stålenhag’s series of stories and illustrations (Amazon link) called “Tales from the Loop”. Specifically this piece titled “Åkersnuten”

Wow! Not only is this a great build by itself, but it’s an incredibly faithful representation of the original painting. The small lever pieces as “tendons” on the legs and arms was a brilliant choice. The colors are spot-on. And using a SNOT technique for the portion of base below the children is the perfect way to re-create the slick wet road. I can’t image this looking anything more like the original at this scale. Very well executed!

You can also follow Simon Stålenhag on his website, Twitter, and Facebook (and maybe get some inspiration for your next MOC). And the awesomeness doesn’t stop there. RPG fans should check out the Tales from the Loop RPG. And Amazon Studios is working on the production of a Tales from the Loop series!

Tales from the Loop TV series

As of writing (July 29 2019), there don’t seem to be any release dates for the Tales from the Loop series yet. But the IMDB page already lists a cast and at least 8 episodes. Rebecca Hall is the only cast member listed in all 8 episodes, so we can probably assume she’ll be playing a very important character, if not the central lead character. She’s also the only cast member currently listed on the Wikipedia entry. Keep an eye on IMDB and Wikipedia for release dates.